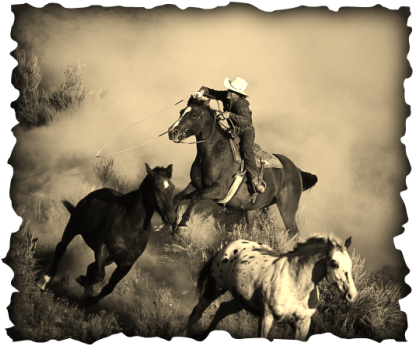 Hey there. I'm Ed Bailey. If my saddle could talk, it'd tell you folks a whole lot of true stories that would keep you up nights. Some times you'd be up nights laughin'. Some times you might be cryin'. But you'd never get around to interruptin' my saddle 'cause when that gal talks, everybody listens.
I was raised by a group of Jehovah's Witnesses. By the time I was a teenager, I figured it was better gettin' shot at by the enemy than it was sellin' the Watchtower door-to-door, so when I was eighteen I joined the United States Marine Corps. After that I spent some time as a one-percenter. More recently I spent time taking people into the wilderness on either horseback or mules, out here in the Mammoth Lakes region, so they could go camping. Nowadays I drive a bus for the ski resort.
So as you can see, I've been a lot of places and I've done a lot of things. In the days to come, I'll be heading back to this website to give you all some specific stories that'll either make you laugh or cry, or maybe a little of both. Either way, while you're stopping by I hope you'll take a couple minutes to browse around my store up there on what they call the navigation bar. We got the best deals going on airline tickets, hotel stays, rent-a-cars, motorcycles, and all kinds of stuff.
Well, I gotta get back in the saddle. Talk to you folks again real soon.